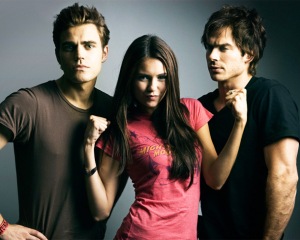 I finally cracked open The Vampire Diaries season one DVDs my brother got me for Christmas and amused myself by rewatching the pilot. And, my goodness, was it pilot-y! It’s stilted, with all the characters drawn in broad strokes and spouting info dump-y lines. The diary portions book-ending the episode are particularly painful.

I remember now why I found it all a bit cringe-worthy, and why some more wary viewers probably weren’t tempted to watch beyond the pilot — if they gave it a shot at all, since the promos leading up to the premiere were similar in tone. It hits all the Twilight buttons — I’ve theorized before that there was a deliberate nod — with Elena being a bland cypher, much like Bella, and Stefan not coming off as much more than a brooding hunk.

You can tell that the actors are just feeling the characters out. They haven’t quite grown into their skin, and there’s nothing below the surface yet… no real heat behind the dialogue, no history behind the eyes. And, yet, you also see the seeds being planted for what’s to come, and, if you look closely, how the show is going to make its turnaround to something darker and more finessed. Because, as I’ve noted in past entries and Soapbox columns, it certainly did make that turnaround, becoming the CW’s most inventive and well-written show in years. Nina Dobrev is a woefully undervalued heroine, and Paul Wesley and Ian Somerhalder are doing the best work of their careers.

Somerhalder, in particular, is fascinating to me because he’s playing an incredibly complex villain, a complete sociopath, that women want. It’s the Todd Manning/Sonny Corinthos/EJ DiMera thing, except on a whole other level, because he’s literally an inhuman predator. You certainly get those vibes in the pilot, thanks to the two brutal attacks against humans Damon commits, and the fight he starts with Stefan. You know this guy is bad news from the get-go… and yet you can’t look away. That, more than anything, was the pilot’s hook. The minute Damon shows up, it’s a game-changer.

I love tracing the evolution of a story, seeing how it gets from point A to point B to point Fan-freaking-tastic. The Vampire Diaries‘ pilot nips at your ankles, bats at you with claws. And just a few episodes later, it sinks its teeth in and doesn’t let go.

2 thoughts on “The Vampire Diaries at first bite”