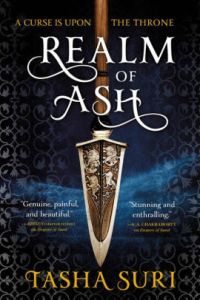 I’m not gonna lie: November’s reading round-up kicked ass. Probably because I used the time I should’ve spent writing to read instead. Oops? I have no regrets, though, because playing hooky introduced me to some of my favorite books of the year. Realm of Ash by Tasha Suri is just as exquisite as last year’s Empire of Sand—a gorgeous slow-burn love story set in a world inspired by Mughal-era India. Suri is honestly one of the freshest voices I’ve encountered in years and I cannot wait to see what she puts out next. Hot off a trip to Disney World’s Galaxy’s Edge and on tenterhooks waiting for Star Wars: The Rise of Skywalker, I dove right into Rebecca Roanhorse’s Resistance Reborn. This Poe Dameron-centric novel tells us what the Resistance is up to leading up to the final volume of the new SW trilogy, and it’s just so gorgeously written. Roanhorse vividly brings both beloved and new-to-me characters to life.

Love Lettering by Kate Clayborn is already one of my favorite books of 2020. The depth of the characterization and the attention paid to heroine Meg’s craft just blew me away. As did the hero Reid, who has a lot going on beneath his starchy exterior. Meanwhile, Joanna Shupe’s The Prince of Broadway gives us another bold-as-brass American heroine in Florence Greene—who is just as awesome as her sister Mamie was in The Rogue of Fifth Avenue.

Backlist adventures: Ruthless by Anne Stuart—which hit me in my feels in the strangest way—and the thoroughly filthy Telling Tales by one of my dear friends, Charlotte Stein.

On the wishlist/TBR:
The Widow of Rose House by Diana Biller