I started reading The Uncanny X-Men in the 1990s, swiftly graduating from yoinking my brother’s weekly comic book haul to filling up my own boxes. My first major “X-Men event” was the Extinction Agenda storyline in 1990 and then I followed that into the blue team’s X-Men title and, of course, the 1992 animated series.

Why am I kicking off with my X-credentials? Well, you know, Fake Geek Girl, etc. Let’s just get that bullshit out of the way. I know my X-titles. I know Gambit. I stole his first real appearance (UXM #266) out of my brother’s box and haven’t given it back. I had at least four Gambit posters on my bedroom wall. I kept his trading card. I had t-shirts. Hell, Gambit and Rogue were one of my LiveJournal icons. Ask me to name my top X-Men and it’s pretty easy: Gambit, Wolverine, Rogue and Jubilee.

So, you can probably understand why I haven’t been a huge fan of the movies — shakier than the ever-changing comic X-canon, poorly written, miscast blockbusters that do no favors to characters I grew up loving. Fox’s X-Men film franchise has been more miss than hit, and the decision to cast Channing Tatum in a Gambit spin-off only furthers the death spiral of a lackluster series. Flash, bang and star power are not the X-Men and — ironically — Gambit’s story, more than anything, is one about how a weakness for pretty faces can spell your doom.

Comic fans first met Gambit as a selfish thief roped into helping Storm, who’d been temporarily turned into a child. (No, folks, despite what That Wolverine Movie We Shall Never Speak Of tells you, Logan was not Remy’s entré to the X-world.) The two struck up an unlikely friendship and it was Storm who encouraged him to check out the X-Men…and he checked them out alright. Enter Rogue. The other important woman in his life, the one who would change the course of his destiny. The New Orleans Thieves Guild had nothing on how one mutant woman stole Remy LeBeau’s heart. He was pretty much in instant lust. The catch? He couldn’t have her. Rogue’s mutant power, and her strong will and her walls, made her the one lady he could never seduce. 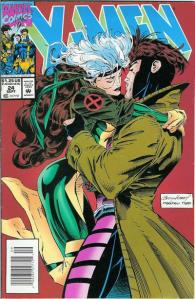 So, you know what he had to do? Get to know her. Join the X-Men. Stick around. Learn how to be a team player. And, okay, try even harder to get in Rogue’s pants. He almost died for one kiss.

The sexy accent, the kinetic energy and charged-up playing cards, the bo staff…those are just window dressing for one of the most compelling, albeit twisted and largely dysfunctional, love stories in the Marvel universe.

To ignore that is to miss the point of Gambit entirely.

Gambit is not Channing Tatum. Gambit is Gambit and Rogue.

Sure, you could argue that he’s interesting on his own … but his solo titles were short runs. And every really fascinating, meaty Gambit story ties back to the X-Men, to his and Rogue’s tumultuous relationship. When Bishop showed up to accuse him of being the Witness, it was smack in the middle of his first actual date with Rogue. When Gambit’s wife Bella appeared on the scene, he had finally made emotional inroads with Rogue. What did Sabretooth torment Rogue and Gambit with? The Gwen Stacy-esque death of Remy’s girlfriend, Genevieve. When we learned what Gambit’s secrets were — that he’d worked for Mr. Sinister as part of the Marauders — it was because Rogue absorbed his memories. Categorically, every time Gambit screwed up or succeeded, it was related to women he cared about. The only thing that ever really exploded was his personal life. The last thing this character needs is to be the focus of a big-budget action movie starring a muscular hunk.

With Channing Tatum rumored to make his debut as the Ragin’ Cajun in 2016’s X-Men: Apocalypse, I only have one question: Will he go Rogue?

2 thoughts on “Charming Rogue: Why Channing Tatum as Gambit Misses the Mark”