What does it say about me that I was in front of the TV in my PJs with a 100 calorie pack of chocolate-covered pretzels at 6 PM on a Friday? #1. It says I used entirely too many prepositions in that sentence. #2. It says I probably need to invest in a TiVo! #3. It says I must really be into pain. Because let me tell you, watching the Daytime Emmys coverage live for four straight hours could probably be considered akin to sending someone to Guantanamo Bay. Luckily, I had one friend on the phone and another three on Instant Messenger to help me through the torture.

Is it just me or are awards shows just not what they used to be? I remember glitz, I remember glamour, I remember people being in the bathroom when their names were called. I remember bizarre drunken rambles that were actually hilarious instead of boorish.

This year’s Emmy pre-show on SOAPnet was rife with technical difficulties and hosted by people who talked about deodorant issues, were entirely too preoccupied by the Shoe Cam, and who deemed Tyra Banks, an off-key Rhapsody in Bronze, the Best Dressed of the night. *shudder* And I’m not even going to get into some of the specific faux pas made by specific hosts.

Then, the telecast itself on ABC was a snooze. The first five minutes with THE VIEW’s Sherri Shepherd and AMC’s Cameron Mathison playing out a cute skit on their cross-the-hall sets were probably the most entertaining bit of the night. (“Josh Duhamel is looking for you.” LOL!) Next to Jeanne Cooper’s Lead Actress acceptance speech, where she ragged on Y&R and assured the audience she wasn’t dead. It’s a good thing they gave her the Susan Lucci Memorial “It’s About Damn Time!” Award now, huh? So, yes, that was priceless. As for the rest of it? From the pointless, filler moments at various show tables (would it have killed Beth Ehlers to sit with GL? Her last airdate was today.) to the lack of acting reel clips and an In Memoriam tribute, to the fact that at least 50% of the presenters looked like they couldn’t decide what season they were dressing for, the whole thing was a hot mess. (Come on, who else thought a certain fabulous veteran actress killed the polar bear from LOST and donned its pelt as a trophy? Raise your hand!)

It all felt like something a bunch of neophytes would slap together and post on YouTube with a “PLZ COMMENT ON MAH VID.” Although, hmm, all things considered, maybe LOLCats-speak would have improved the show… 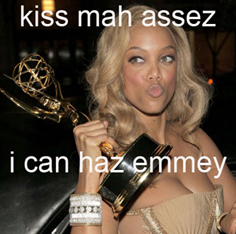 2 thoughts on “The 35th Annual Festival of Torment Emmy Awards.”