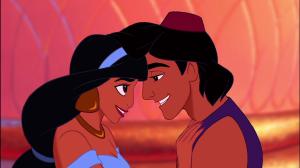 Earlier this month, Disney announced the cast of their upcoming live-action Aladdin: Mena Massoud as Aladdin and Naomi Scott as Jasmine, with previously announced Will Smith as Genie. We need a lamp and a genie of our own to wish this travesty away.

When I was a kid, the only Barbies I had were the Hawaiian one and the random Asian one that came wearing leopard print and had some sort of sidekick animal. Because those were the Barbies that looked the most like me. Keychains with my name on it…? Forget about it. As for movies…? Well, my parents took me to Octopussy and Gandhi because they took place in India. Yes, reader, that was the option available to me. Enter 1992’s Aladdin. Enter 1998’s Mulan. Two films with strong women, strong people of color and strong love stories. made exclusively for kids! Sure, they weren’t Indian stories — and both are stacked to the gills with painful racial and religious stereotypes — but for me at the time they were close enough.

It was revelatory. Sure, you could argue that we had the Jungle Book, but one brown kid and a bunch of talking animals does not necessarily make for an optimal “I see myself” experience. Especially if, like me, you’re allergic to cats. (Keep that paw away from me, Bagheera.) So, seeing Aladdin and Jasmine and Mulan up there…dancing and singing just like any other Disney heroes and heroines…for many, many, young people of color, it was a life-changing, life-affirming experience. We get adventures. We get kickass soundtracks. We get love stories.

Now, with Disney making a shift toward live-action remakes of those classic cartoon musicals, it feels like those things are being taken away. And “close enough” just won’t cut it in 2017.

2015’s Cinderella and this year’s Beauty & the Beast kicked off the reboot-mania. Despite their respective turns on Game of Thrones and Downton Abbey, neither Richard Madden nor Dan Stevens are household names. Lily James…? Not someone I could pick out of a lineup. And I could probably spend an entire separate post unpacking why Disney thought Emma Watson was a good idea for Belle — she and Hermione both like libraries! — even though she can’t sing. Not concerned with star power, Disney focused instead on doing shot-for-shot remakes of their beloved properties. On doing justice to these movies and these princesses.

But they seem to be struggling to do the same for Aladdin and Mulan. Not only are the films not getting shot-for-shot remakes, but the casting process for the former has been ridiculous. You would think we’re past the era of Steve from Full House voicing an Arab street boy and Donny Osmond singing for Chinese captain Li Shang, but we’re really not. Disney and Guy Ritchie auditioned a couple thousand actors for their principals and basically threw up their hands while the Internet chimed in about every possible actor with a tan being considered for a role. (The next person to tell me that Dev Patel should’ve played Aladdin is getting a samosa in the face!) This week, Disney finally ended the torture and the speculation, making public the casting of Egyptian Canadian Mena Massoud and British Indian Naomi Scott. There, they seemed to be telling us. We cast brown people. Are you happy now? While Egypt is at least in North Africa, I gotta tell ya: Gujarat and England are nowhere near Middle Eastern. And both stars are very fair-skinned. Paler than the animated Aladdin and Jasmine, which is saying a lot!

What’s being said loudest of all is that all of the Muslim and Middle Eastern kids who finally saw themselves reflected onscreen don’t count. That Guy Ritchie’s bombastic, frenetic-paced vision is more important than the “whole new world” that was opened up to us. And that, 25 years after the original movie, we still have to be happy with the bare minimum.

I’m 39 and that’s heartbreaking. Imagine now how much more heartbreaking it is for an 11-year-old boy from Iran or a tween girl from Jordan. Your love stories aren’t important enough to get right, this telegraphs. You should be satisfied you’re getting this at all, this sneers. And, oh yeah, you still can’t have a keychain with your name on it.