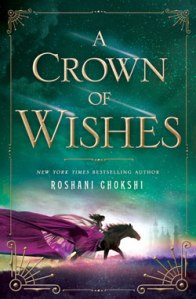 You don’t need to have read Roshani Chokshi’s lyrical debut, The Star-Touched Queen, to read its sequel, A Crown of Wishes, but you’ll probably kick yourself if you don’t ― because it’s a beautiful introduction to the world that continues to grow in this, her second fantasy release. Steeped and rooted in Hindu mythology, A Crown of Wishes follows warrior princess Gauri and tactician prince Vikramaditya as they struggle to prove themselves and take back their respective kingdoms ― by competing in a tournament where the grand prize is a wish granted.

The first few chapters of A Crown of Wishes might be a little rocky and confusing for some readers, but it doesn’t take Chokshi long to hit her stride, infusing her prose with beautiful world-building and snarky banter as her characters set upon their journey. Though the premise may sound Hunger Games-y, it’s actually a lot more philosophical and fantastical with a good dose of political machinations thrown in. Vikram and Gauri face mythological creatures, moral quandaries and their own fears in pursuit of the winners’ wish ― and, oh, a mutual attraction, too! ‘Cause what’s a good quest without romance, right?

“Thank you,” he said, partially to break the silence but mostly because he truly meant the words. “You went back for me.”

“We need two to participate in the Tournament. And the vetala” ― she jerked a disdainful nod at the creature ― “would be of little use. So don’t thank me. I did it for myself.”

The vetala brought his head to Vikram’s ear. “I heard her heart leap from its cage of bones when I said you were dead.”

His own heart did a strange flip. They’d crossed through a Grotto where their own memories had been treacherous, but all he remembered was the sound of her laugh when he asked if they should race. Her laugh was low and throaty, as if rusty with disuse. He hadn’t been able to shake it from his mind.

I’ve seen reviews of the Chokshi’s debut that talk about its similarities to Greek mythology. I think anyone growing up in the west has been influenced by Greek mythology, sure, but her work is distinctly Indian and Hindu ― and it’s really just that people don’t know our stories, our creepy critters and vicious, jealous gods, our tricksters and monsters. Vetalas, yakshas and vishakanyas, oh my! This book introduces a slew of mythological beings to readers who may be unfamiliar with them ― and gives those of us who do know them a sense of kinship and joy.

I’m not sure what the Hindu equivalent of an Easter Egg is, but A Crown of Wishes is full of them! I was giddy from all the gorgeous Indian food porn and the nods to tales from my childhood. I didn’t have books like Chokshi’s as a kid. I had the stories my mother and grandmother told me and Indian comic books called Amar Chitra Katha that covered history, mythology, and literature. Thanks to authors like Roshani Chokshi, Hindu teens growing up today have novels that mirror their experiences and their heritage, that build on the stories passed down by our ancestors. It makes me flail, because young readers get this gift, and so do I!

But enough about me and my cultural squee! Once you strip away the magical and mystical elements, A Crown of Wishes is all about coming to terms with your choices and your responsibilities and acknowledging what story, what legacy, will be left behind once you’re gone. Both Gauri and Vikram have to grow and search inside themselves as the book progresses, because being a real leader isn’t just about wresting back the power and control, it’s about doing what’s right. The Tournament of Wishes, in its twisted way, teaches them that important lesson.

I was beginning to understand the Tournament of Wishes. Each step we took and every choice we made fashioned the tale that Kubera would keep from us. Whether we would survive to tell it ourselves was not his concern. He wanted to see what we thought, how our very will and ambition shaped the future. I was thoroughly mortal. My touch wasn’t toxic. No magical abilities had ever revealed themselves to me no matter how much I wished for them. But I had a vast source of will.

And will was an enchantment that no being could touch because I alone could wield it. That was power.

Gauri especially learns valuable truths about what being a queen really means. She’s a very active character, headstrong and passionate and “my way or the highway,” and watching her realize that there are other ways to rule is really satisfying. Meanwhile, Vikram is a perfect beta hero ― which we don’t really see a lot of in young adult or adult romance, so that’s a treat as well. And their romance doesn’t get shortchanged in service of the bigger arc. In fact, it’s vital to it. They’re funny, they’re hot together ― and they make a great team.

As the two of them fight and finagle their way through the various trials conceived by the wily Kubera, it’s the reader who gets their biggest wish granted: a compelling wrap-up and a sigh-inducing ending!

Order a copy of Roshani Chokshi’s A Crown of Wishes: