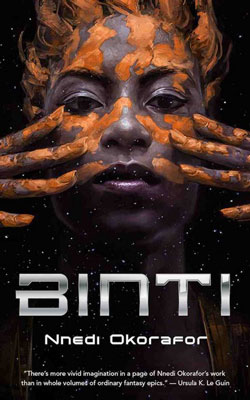 Her name is Binti, and she is the first of the Himba people ever to be offered a place at Oomza University, the finest institution of higher learning in the galaxy. But to accept the offer will mean giving up her place in her family to travel between the stars among strangers who do not share her ways or respect her customs.

Knowledge comes at a cost, one that Binti is willing to pay, but her journey will not be easy. The world she seeks to enter has long warred with the Meduse, an alien race that has become the stuff of nightmares. Oomza University has wronged the Meduse, and Binti’s stellar travel will bring her within their deadly reach.

If Binti hopes to survive the legacy of a war not of her making, she will need both the the gifts of her people and the wisdom enshrined within the University, itself – but first she has to make it there, alive.

Binti’s future Earth is at once familiar—parental expectation weighs heavily on her; she’s the target of racism and Othering because she’s different—and new to readers. Different alien species try to coexist, there are transporters and living spaceships and all kinds of gadgets, and Binti’s people wear the red clay of their homeland, otjize, on their skin and in their hair. But what really stood out to me the most is how Okorafor turns mathematics into poetry. Math is not only Binti’s strength, but it’s actually the basis for the more spiritual and magical aspects of the book as well. “We prefer to explore the universe by traveling inward, as opposed to outward,” she says of the Himba. And yet she finds commonalities amongst her fellow students, too.

They were all girls who grew up in sprawling houses, who’d never walked through the desert, who’d never stepped on a snake in the dry grass. They were girls who could not stand the rays of Earth’s sun unless it was shining through a tinted window.

Yet they were girls who knew what I meant when I spoke of “treeing.” We sat in my room (because, having so few travel items, mine was the emptiest) and challenged each other to look out at the stars and imagine the most complex equation and then split it in half and then in half again and again. When you do math fractals long enough, you kick yourself into treeing just enough to get lost in the shallows of the mathematical sea. None of us would have made it into the university if we couldn’t tree, but it’s not easy. We were the best and we pushed each other to get closer to “God.”

When an unexpected and horrific act of violence en route to Oomza University changes the tone of Binti’s journey and her life, it’s her abilities as a harmonizer and her faith in patterns and numbers that keeps her firmly on course. Okorafor takes a situation in which most of us would become total basketcases and uses it to show us her protagonist’s incredible gifts—not only for mathematical sight but for survival and for empathy. Especially when Binti starts to bond with Okwu, a hotheaded young Meduse—a race who, by the way, resemble giant jellyfish.

Even I could tell that Okwu was not an elder among these Meduse; it was too hotheaded and . . . there was something about it that reminded me of me. Maybe its curiosity; I think I’d have been one of the first to come see, if I were it, too. My father said that my curiosity was the last obstacle I had to overcome to be a true master harmonizer. If there was one thing my father and I disagreed on, it was that; I believed I could only be great if I were curious enough to seek greatness. Okwu was young, like me. And maybe that’s why it was so eager to die and prove itself to the others and that’s why the others were fine with it.

In talking with and learning from Okwu, Binti soon realizes that mathematics isn’t the only thing that can unite people. Language and dialogue can as well. As Binti’s understanding of the Meduse’s goals expands, she realizes she must use all the tools at her disposal, including her precious reserves of otjize, to save the University and all the people at the institution from disaster. If she can save her own life and that of the Meduse, too, that’s a bonus. Does her gamble pay off? Let’s just say that there are legitimate moments where readers won’t be sure she’ll succeed. Sketched out in Okorafor’s lyrical prose, nerve-wracking, tension-laced chapters build to a truly breath-taking moment of transformation.

By the time I finished this short but satisfying tale, all I wanted was more. More lovely words, more intricate cultural details, and more of Binti’s experiences in a world she rescued. She’s a truly memorable heroine—one you’ll readily cheer for, happily travel with, and tearfully but joyfully bid goodbye.

Order a copy of Binti by Nnedi Okorafor: