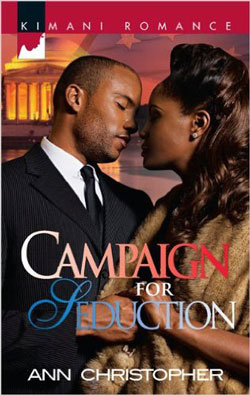 The 2016 U.S. presidential election is nearly upon us, and candidates aren’t the only ones throwing their hats in the ring. Political romance authors would like your vote as well. (Make your own caucus jokes. You know you want to.)

In 2008, we saw the first young, picture-perfect family move into the White House since the Kennedys in 1961: a dashing President in Barack Obama, a gorgeous First Lady in Michelle, and two beautiful little girls. It was instant fodder for romance…you would think. But aside from Ann Christopher’s 2009 Campaign for Seduction, which features journalist Liza covering sexy presidential candidate John, political romance as a genre didn’t quite take off anywhere but in the fan fiction realm. (You could go looking for Barack Obama/Rahm Emanuel smut. I’m not saying you should. I’m just saying that it’s there.) Fast-forward nearly two terms, seven years and four seasons of Shonda Rhimes’ Scandal later and we’re finally seeing an uptick in Capitol Hill hookups. Shows like The Good Wife, Madam Secretary, House of Cards and NBC’s short-lived State of Affairs join Scandal in send-ups of politics and players while romance writers tackle senate races, lobbyists, unions, and ever-present historical renderings of the House of Lords.

It doesn’t matter what your politics are, whether you lean left or right, love is nonpartisan. That doesn’t mean it can’t reach across the aisle, like in Emma Barry’s Party Lines. The third book in her D.C.-based  Easy Part series sees Democrat Michael and Republican Lydia working on opposing campaigns during the Iowa caucuses. Like its two predecessors, Party Lines is neck-deep in drama and full of fiery banter. Think James Carville and Mary Matalin but with more hair. Opposites attract doesn’t just work with conservatives and liberals, though. In Anne Whitney’s 2014 e-book Too Close to Call, dogged journalist Carrie goes head-to-head (and bed-to-bed) with Marcus, a mayor’s press secretary. You can’t fight City Hall, but what about fighting temptation?

If it’s skeletons in politician closets that intrigue you, L.A. Witt takes that quite literally with her 2012 book Where There’s Smoke. Campaign manager Anthony falls for Jesse, who is married to a woman and running for Governor of California. More recently, Heidi Joy Tretheway’s The Phoenix Candidate has congresswoman and vice presidential hopeful Grace being vetted by political consultant Jared in more ways than one. In Chanel Cleeton’s Flirting With Scandal, Jackie, the illegitimate daughter of a senator, falls for a candidate for the Virginia state senate. Will needs a good political wife, not a liability. If you think about it, local political races actually bring a small-town contemporary feel to a larger framework. Take for instance Cheris Hodges’ Rumor Has It where Liza seeks to take down her best friend’s cheating husband by allying with his political rival Jackson, or Molly O’Keefe’s Indecent Proposal, which sets the tale of would-be congressman Harrison and his one-night stand with bartender Ryan amidst her popular Boys of Bishop series.

Historical romance is no stranger to political tension either. Rose Lerner’s Sweet Disorder sees a returned soldier trying to sway a widow to use her late husband’s vote for his candidate brother and her swaying his heart in the process. Courtney Milan’s The Suffragette Scandal is, as you might expect, rooted in British women’s rally for the vote. Carrie Lofty’s Starlight takes a page from Elizabeth Gaskell’s North and South to talk about mill workers and unions. The third of Erin Satie’s No Better Angels books, The Orphan Pearl, even tackles intrigues and movers and shakers abroad as agents of England and France vie for influence in Turkey.

And this is just the tip of the sexy and scandal-riddled iceberg. It’s clear that politics makes for strange bedfellows―and happy readers.