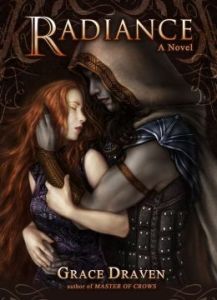 Whenever a book is hyped all over the romance blogosphere and Twitterverse, I get a little nervous. Once bitten, twice shy. I’ve bought a few books based on trusted squee and ended up burned. Fortunately, that was far from the case with Radiance, Grace Draven’s first Wraith Kings novel, which came out in January. It’s good. It’s really good. A gentle love story laced with political intrigue, Radiance finds Brishen of the Kai and Ildiko of the Gauri wed to cement an alliance between their countries. Fortunately, they approach this arrangement with practicality and good humor — which carries through the entire tale.

During their first meeting, Brishen calls his human bride-to-be “a hag of a woman,” because he is appalled by her mollusk-pale skin and odd eyes. As the Kai are gray-skinned, yellow-eyed and clawed, Ildiko has her own thoughts:

I LOLed. I actually may have made a noise like a barking seal. And that honest delight with these characters never wavered. I invested in their emotional journey, in their attempt to make a home amidst threats of unrest from an opposing nation, and in how they learned to live with their differences. This is a beautiful story, not only of love but of cultural exchange and understanding — and I’m a little sad that such a thing is widely embraced by the romance industry when it stars a white woman and a reptilian/avian man but not when it features people of color. If you can root for Brishen and Ildiko, laugh at their banter and chew on your nails when they’re in peril, what’s so hard about doing that for Farrah Rochon’s characters or Jeannie Lin’s?

I hear a lot of people saying that fantasy romance is about to experience a resurgence, and I certainly hope so. Between books like Draven’s and Jeffe Kennedy’s Twelve Kingdoms series, we have a promising start. But that doesn’t mean the other work, championing diverse books, is finished. If you can pronounce “Brishen,” you can pronounce “Akshay,” you know? I initially thought Ildiko was an alt-world version of a Japanese woman — until she was described as a pale redhead with blue eyes. But I took her as written and loved her for who she turned out to be. I took a chance buying her book and in buying into her and Brishen’s connection, and it worked. That’s the thing about reading: You take a leap of faith, and if you’re lucky you get a happy ending. I want happy endings for more writers and more readers. Radiance truly shines, and I can’t help but hope some of that light spills over to multicultural and interracial romance.