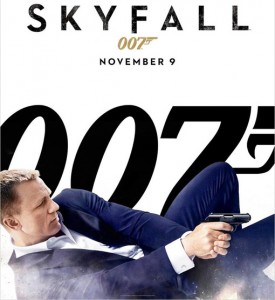 Twenty-third in the long-running franchise of films based on Ian Fleming’s globetrotting superspy, this year’s Skyfall has been praised across all platforms as a great movie, a fun ride, a grand adventure but “not really James Bond.” It’s a strange, albeit incredibly specific, criticism…and one that I disagree with.

I grew up watching Sean Connery, George Lazenby (often overlooked!) and Roger Moore essay the iconic role of Bond…and I don’t use the phrase as some sort of misty metaphor. I saw 1983’s Octopussy in the theater when I was five years old. I wrote a two-page James Bond quiz in middle school. I still hold a long-standing grudge against Axl Rose for the Guns ‘n’ Roses cover of “Live and Let Die.” And I do count Never Say Never Again, even if it’s not part of the official roster. Basically, up until Timothy Dalton and Pierce Brosnan took over, I was a diehard follower of the franchise…and then I began to waver. Why?

Because the mid-80s and ’90s Bond was the franchise trying to find its place in a society that no longer needed a Cold War-era Don Juan who could shoot a Walther PPK, sip a martini and bang a hot chick without fear of disease and call it a day’s work. Dalton had the necessary grit of a modern-day Bond who’d seen too much. Brosnan had the charm that had nearly netted him the role years earlier. But there was still something missing. Something they just hadn’t hit on yet. I think they’ve found that in Daniel Craig’s Bond and Casino Royale and Skyfall. (Superfan or no, I’m pretending Quantum of Solace didn’t actually happen.)

How do you take an archetype of the 1960s, freewheeling bachelor who could do anything and apply that to 2012? You have to adapt. And that is depicted in almost falling-anvil fashion in Skyfall, where Bond’s nemesis is a spy who came into the digital age but lost his sanity in the process. Gone is the Q (RIP, Desmond Llewelyn) who delighted in his toys and kept watch over Bond like a doting grandfather. Now Bond’s life is in the hands of a skinny hipster who thinks technology is the true god and who doesn’t bother hiding his initial contempt of the hands-on, remnant-from-another-age 007. 21st Century James Bond is all about proving himself and fighting for his relevance. Something that earlier Bonds never had to do.

So, in that sense, yes, Skyfall isn’t like many of its predecessors. James’ victories aren’t effortless. His alcoholism is more Don Draper-ugly than charming, his sexual conquest — slipping into a jaded prostitute’s shower — is more creepy than aspirational and sexy. Shit blows up and he saves the day, but he loses along the way. I can think of few occasions where that happened in earlier films: On Her Majesty’s Secret Service, where Blofeld kills Bond’s wife just after they wed, License to Kill, where Felix’s wife’s death by shark after their wedding (misogynist pattern, ahoy!) spurs him to vengeance and then Vesper’s death in Casino Royale. And if you consider that the loss of women — the conquest of whom has been long thought to be Bond’s “most Bondian” quality — has always signaled Bond’s darkest moments, then Skyfall is actually full of Bondage. Perhaps in the most poignant way of all.

More than anything, James Bond films are a product of their time and a reflection of that particular era’s masculine ideal. Sean Connery’s Bond was suave, witty and unerringly competent in the face of global villainy. Roger Moore’s films embraced the broad-stroke, racist camp of the 1970s and early ’80s, as the movies tried to reflect a more diverse society and did it in a hamstrung fashion. Dalton and Brosnan’s movies showed the growing pains of post-Cold War intelligence work and trying to find a balance between all-powerful spies and being fallible men. The James Bond of today, for the moment wearing Daniel Craig’s skin, acknowledges what came before but has to obliterate it…lest he get left behind.