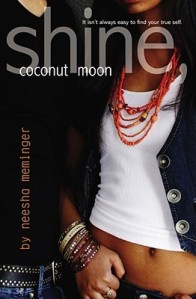 I read some positive reviews of Neesha Meminger’s Shine, Coconut Moon last year on a few book blogs, so when I recently found it at the New York Public Library, I decided to give it a shot. The novel is a post-9/11 coming-of-age tale about Samar “Sam” Ahluwahlia, whose entire life changes when, just a few days after the tragedy, her uncle arrives on her doorstep. A practicing Sikh who wears a turban, Sandeep becomes the inspiration for Sam’s exploration of her dual identity.

Sadly, the book is written in such broad strokes, it’s more an after-school special than a deep treatment of identity issues. The September 11th attacks absolutely created a sense of being the Other for many of us youngsters in the South Asian community. Places we were born and raised in suddenly became minefields of racial tension. Shine is set in New Jersey, a few hours away from the city, but that urgency and fear feels thousands of miles removed. Sam and her classmates might as well be discussing the events some ten years later, not a handful of days later. There’s a lot of telling the reader what happened and how the whole community is buzzing about it, but not a lot of showing. And then big, clunky things happen to open Sam’s eyes and spur her quest. And that’s a problematic aspect of the whole book. It’s all info dump and references to Samar researching Sikhism on Wikipedia and reading Sepia Mutiny…with no real depth given to the characters’ personal connections.  (By the way, SepiaMutiny.Com wasn’t even around in 2001. It was created in 2004. And Wikipedia just barely makes the cut. It certainly wasn’t the “go-to” site it is now.)

Sam reads much younger than seventeen. References to her shopping at Victoria’s Secret and drinking and making out with her boyfriend collide with her bewilderment over the schism in her family and her complete naiveté about her heritage. I guess I have a hard time believing that someone growing up in New Jersey, in a fairly diverse community, would be that clueless. Her therapist mom is liberal enough to let her date, doesn’t seem to notice that her daughter is constantly sneaking drinks at social events, and yet is so petrified by her own oppressive childhood that she teaches her nothing about being Punjabi? Dude, I grew up in southwestern Ohio in the ’80s and ’90s and I had friends who could qualify as the titular coconuts (meaning “brown on the outside, white on the inside”), but they weren’t so westernized that they didn’t know a single thing about where they came from. And, by and large, even if they didn’t speak an Indian language, they at least understood a little! Sam and her mom don’t wear shoes in the house and her mom cooks Indian food…so there’s a definite disconnect there.

I think my own experience has a lot to do with how I’m reacting. As I said, I grew up in Ohio. There were just a handful of desi kids in my entire school system. I was picked on for much of those 12 years. But I don’t harbor bitterness about being different…about my parents holding to Bengali values and traditions while I tried to assimilate. I don’t see it as such a black and white issue: that either you’re a coconut or you’re immersed in your culture. There wasn’t an “either/or” for me and most of my Indian friends. It was what it was, you know? And despite being separated from my parents’ families by a few oceans (as opposed to Sam’s mother separating them by choice), we created familial bonds with fellow desi folks here in the States and kept ties to India. So, Shine, Coconut Moon feels really alien and inauthentic for me. I guess the best way to explain why Shine didn’t work for me is this: From the very beginning, Sam calls Sandeep “Uncle Sandeep.” Everyone I know of South Asian origin that grew up here, regardless of their linguistic fluency, would use “Sandeep Uncle” or something like “Sandeep Mama” (I’m not sure what the Punjabi equivalent is, but that’s Hindi and Bengali for “maternal uncle”). That tiny, little choice of Meminger’s told me that this book wasn’t targeted to me. But I still wanted to give it a chance to…well, shine.