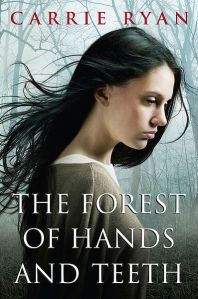 I was reading The Forest of Hands and Teeth, by Carrie Ryan, while at dinner the other day, and someone asked me what it was about. “A zombie apocalypse,” I said, knowing that it was the shortest and easiest explanation. But having finished it, I know it’s not an accurate explanation. The story of a young woman coming of age in a village surrounded by the titular Forest and the vicious, relentless Unconsecrated beings who populate it, The Forest of Hands and Teeth is a brilliant piece of fiction. It earned many critical raves last year…and, in my estimation (whatever that’s worth) absolutely deserves them.

Ryan creates a world that could be the past, could be the future (the reader does eventually learn which). Most importantly it exists only to survive the onslaught of the Unconsecrated. Mary has never known anything else except that grim determination to live under the rule of the religious Sisterhood and those that guard the fences. But thanks to her mother’s stories, she longs for more, she dreams of the outside, of the ocean. And Mary’s passion for the ocean is just as relentless a hunger as that of the zombies. It’s this that the reader must keep in mind as we navigate Ryan’s Forest, and all the terrors and horrors within.

There are parts of this book that are poetic and lovely and other parts that are so stark and terrifying. Ryan doesn’t shy away from the truly awful things that happen to you when the human race is dying out and there are mindless creatures that were once human just beyond the perimeter. She lets you experience the hopelessness, the desperation, and the tiny snatches of happiness you have to grasp for amidst it all. If I had to summarize it with a one sentence pitch, I’d probably say it’s The Village meets 28 Days Later… and since I loved both of those movies, believe me it’s a compliment. I was hooked pretty much from the get-go and my attention never once wavered. I invested in Mary and her questioning spirit, in the way she fought not just to exist, but to live.

5 thoughts on “The Forest of Hands and Teeth, By Carrie Ryan”