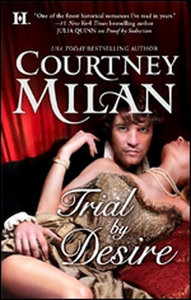 Trial By Desire, Courtney Milan’s second full-length novel, might just be one of my favorite books of the year. It’s so crisply written, with such effective characterization and wit and warmth, that every line means something. Milan doesn’t hyperbolize to excess or wax poetic about anything unnecessary. What the reader gets is a smooth, and beautiful, story about what it means to be strong. (Though the cover makes it seem like a story about a vampire that kills a woman who is missing the top of her head…)

This book is a sequel to Milan’s debut, Proof By Seduction, so I went in thinking, “I haven’t read Proof since it came out…maybe I need a refresher?” But a few pages in, it became clear that Trial stands on its own quite well. Ned Carhart leaves his wife, Kate, a few scant months after their hasty marriage. They’re basically strangers to one other when Ned returns after three years in China. What unfolds is their journey to trusting each other with some pretty big secrets…and, of course, trusting each other with their hearts.

Very early on, there’s a scene in a pasture with Ned, Kate and an abused horse, whom Ned names Champion. Though it’s very funny (complete with a reference to reigning over goats, which cracked me up and reminded me of Tessa Dare’s Goats on a Boat) there’s also a lot of interesting groundwork laid for the story ahead. Are we meant to see a beaten, broken Champion as a parallel to Ned? (That’s something that Milan does address later in the book.) Most romance novels have a “tortured hero” or a “wounded hero.” Ned is one of the first I’ve come across who isn’t just a brooding cad for the sake of being a brooding cad. He suffers from clinical depression, in a time where it wasn’t commonly diagnosed or treated. And Milan is just amazing at capturing the thought process, the struggle, the fight that a depression sufferer engages in. I was left breathless and moved and near tears for much of the book because Ned is so relatable. He calls his darkness his “beast,” and that’s such an apt description. Ned is envious of Kate’s strength, of how fearless she is. He wants to be more powerful than his depression. He wants to be the strong one. He doesn’t want help. He doesn’t want to be seen as weak. And I loved watching Kate teach him that there are different ways to be brave. They just make such an awesome pair.

“Where will I be?” She could feel his breath whispered against her. “I’ll be right where I should have been this whole time. When you think your castle walls will fall, I will shore them up. When you are afraid you cannot stand, I will hold you upright. I ought never have left. And when you understand that you need do nothing but lean…”

His hands clasped her waist, strong and gentle. holding her up without restraining her. She might have leaned back then.

“When you lean,” he whispered into her ear, “this time, I will catch you.”

That excerpt sort of encapsulated their whole dance for me, and I found it stunningly evocative when I read it. Ned has many moments like this…where he’s trying to build Kate’s trust or someone else’s…and it just made me love him all the more. That’s not to say that Kate falls by the way side. She’s an incredible heroine: determined and passionate. The way she faces down the book’s villain is so badass, and she attacks Ned’s defenses with the same verve.

I really enjoyed Trial By Desire from start to finish. Ned and Kate are funny and human and heartwrenching and just so very right together that when I closed the book, I did so with a deep sense of satisfaction.