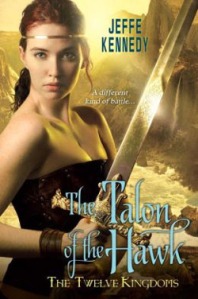 Three daughters were born to High King Uorsin, in place of the son he wanted. The youngest, lovely and sweet. The middle, pretty and subtle, with an air of magic. And the eldest, the Heir. A girl grudgingly honed to leadership, not beauty, to bear the sword and honor of the king.

Ursula’s loyalty is as ingrained as her straight warrior’s spine. She protects the peace of the Twelve Kingdoms with sweat and blood, her sisters from threats far and near. And she protects her father to prove her worth. But she never imagined her loyalty would become an open question on palace grounds. That her father would receive her with a foreign witch at one side and a hireling captain at the other―that soldiers would look on her as a woman, not as a warrior. She also never expected to decide the destiny of her sisters, of her people, of the Twelve Kingdoms and the Thirteenth. Not with her father still on the throne and war in the air. But the choice is before her. And the Heir must lead…

The third installment of Jeffe Kennedy’s Twelve Kingdoms fantasy series tears sharply and deeply into the books’ mythology as well as into the heart of its core family. The Talon of the Hawk, Ursula’s story, doesn’t hesitate to draw blood and, in the process, proves also to be incredibly healing.

All three sisters’ stories have dealt with unlocking the true potential of who you are, and Ursula’s journey is perhaps the most heightened and the most emotionally intense, because so much of her identity is tied up in being the dutiful heir to a tyrant king. She doesn’t take chances like Andi does and she’s not beautiful like Amelia, so who is she? Just a cipher, an extension of Uorsin, or a fully realized woman and person with her own worth? Yes, it is a man―Dasnarian mercenary captain Harlan―who sees that woman and that person and makes her aware of herself as an individual, but it’s not as simple as lust or love fixing her issues. Harlan may be the catalyst for her self-awareness, but it’s Ursula who has to painstakingly evolve ― and Kennedy makes sure the reader feels every beat and step of that process. Even before Harlan starts to seep into Ursula’s consciousness, she chooses to don the Heir’s Circlet and her mother’s jewels as a message to her father. The seeds of growth are there. It’s just that they need to be tended and encouraged.

I should have realized he’d see my wearing of Salena’s jewels as aligning myself with her, which had come to mean with Andi, Rayfe, and the Tala also. The  year had tried us all. Uorsin had poured his life into creating and preserving the peace of the Twelve Kingdoms. Of course he could allow no threat to it.

If he believed I’d done as he thought, then I’d deserved his censure.

I needed only prove myself.

Ursula knows King Uorsin is volatile, paranoid and violent, yet she wars with herself, thinking that if only she is a better daughter, a more loyal subject, she’ll earn her place as his heir. It’s tragic, because the reader can see that he’s awful and abusive, but Ursula doesn’t think twice about how he treats her. She can’t. She has bigger priorities: working with her Hawks, protecting her sisters, protecting the realm. She offers to track down her sister Ami and her babies and bring them home t Ordnung while simultaneously doubting that this is the best course of action. There’s a constant push-pull, but Kennedy also folds in constant compromises…changes so seamless that Ursula doesn’t realize she’s drifting away from the king’s side and coming into her own. Her Hawks begin working with the Dasnarian Vervaldr, merging and learning fighting styles. She accepts muscle massages from Harlan to ease her aches―and for prickly Ursula to let someone touch her is pretty huge! Not that she’s paying attention, due to her deep denial of her own needs.

“You know nothing about me. I don’t need rescuing and I’ve already asked you to leave once.”

He didn’t move. “I know more about you than you want me to, which is the problem. You trembled when I touched you, heating willingly to my hand; thus, I know you want me. You wear the bruise on your face that your father dealt you and pretend to me and the world that it’s not so. You tell lies to yourself and you expect me to believe them, too. I don’t. You think it’s your job to protect everyone else. Perhaps you should consider protecting yourself.”

I tapped the hilt of the sword I still wore, the topaz smooth and warm. “This is my protection.”

Eventually, when the influence of a poisonous Dasnarian witch named Illyria, impacts Uorsin and the people of Ordnung in ways that Ursula cannot ignore, she’s forced to leave in order to save the kingdoms. With Harlan and her Hawks by her side, the trip she undertakes to Annfwn ends up being one to a stronger self ― one who learns how to trust people, to love and to face her demons. But can she accept her true place in the Twelve Kingdoms? That’s a question readers will have to discover the answer to on their own.

Jeffe Kennedy’s The Talon of the Hawk is not an easy read; there are parts that are incredibly painful, but that only makes the wondrous parts more wonderful and the romantic parts more sensual…because Ursula has to fight so much and so hard to believe she deserves happiness. As to who wins and who loses when your greatest foe is yourself…well, we can take a hint from Andromeda. The wild queen of the Tala’s prophecy for her stubborn sister foreshadows, “Your reign will be extraordinary.”

Order a copy of The Talon of the Hawk by Jeffe Kennedy: